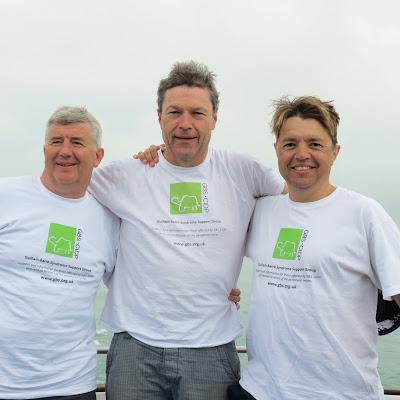 Stuart Adams & I met the three person team consisting of Rory Fitzgerald, Matthew Johnston & Jim Boucher (the Hayling Legends) at 1am. CSA Observer Sam Jones & 3 BBC film crew for programme "See Hear" also onboard. Starting point Samphire Hoe. Rory starts swim at 0150, Matthew takes over at 0250. Jim carries on the swim at 0350. This is the rotation that will continue until we get to France or the team gives up.
Sou'west lane is quiet tonight as the team forges on. Sunrise at 0508. Rory happy after his second swim. Dover Coast Guard alerts Livorno Express of our position & asks to give us a wide berth which it does. At 0640 I inform Dover Coast Guard that we are entering the Separation Zone: 20 minutes later I inform Gris Nez Traffic that I am entering the North East Lane.
The passage though the North East Lane is largely uneventful, swimmers making good progress. The slack tide as the team is swimming into the Inshore Traffic Zone gives them an opportunity to make a good push towards the shore. Lobster pot markers & a yacht with an inexperienced (or drunk) crew give me a few things to think about but nothing too difficult. Jim makes the landing onto the beach at Audresselles with at time of 11hrs, 33mins. Well done team - good work. 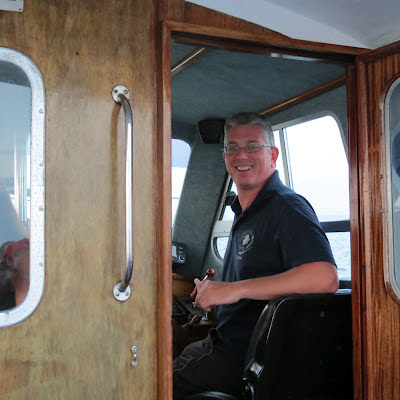 
Stuart,
I, on behalf of everyone in the team, want to send our sincere thanks for your help and guidance in making our swim a success. Your professionalism and services were second to none.
I attach a few photos.
Best wishes,
Matthew

Posted by DanEarthquake at Monday, August 06, 2012