Angela Lurssen was a member of the Just Do It relay team earlier in the year, so was no stranger to swimming in the English Channel. After the usual formalities of paperwork and safety instructions we made our way to Shakespeare Beach.
Swim start 0714 at Samphire Hoe. Angela has an hourly feeding schedule for the first three hours followed by feeds every half hour. Pace swimmers on board supporting Angela are James "Tex" Turnbull, who made a solo attempt earlier in the year and Keith Hunt who was in the Just Swim It relay team with Angela earlier in the year. 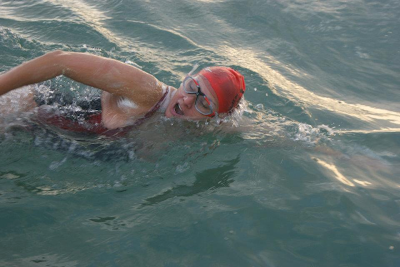 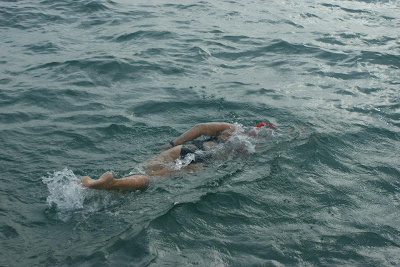 1045 Pace swimmer James enters the water for his first hour of accompanying Angela. 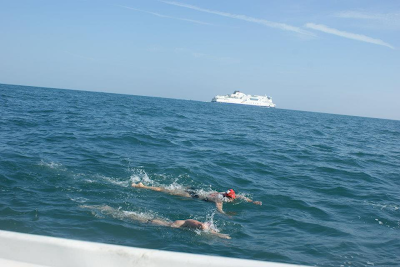 1115 Entered South West Lane. The Straits of Dover are arranged like a motorway, with two separate lanes for traffic – the and the North East lane. This scheme is called the Dover Traffic Separation System which was introduced after a series of accidents which started on . The disaster happened when the Peruvian freighter Paracus hit the tanker Texaco Caribbean in thick fog causing the Texaco Caribbean to explode and sink with the loss of many crew members. The explosion was heard and felt throughout the area. The wreckage was hit the following day by the West German cargo ship which also sunk with the loss of 24 of its 32 crew members. On , the wreckage was also hit by the Greek cargo ship Niki, which sank with the loss of its entire crew.
Following a government enquiry, the Dover Traffic Separation System (), the world's first maritime radar controlled was set up by the International Maritime Organization. The shore-based long range traffic control system was updated in 2003. along both coasts provide information on the Traffic scheme and Channel weather. The scheme allows vessels travelling North to use the on the French side of the straits and South bound vessels to use the South West lane on the English side. Between these two channels is a separation zone. Coastal traffic and yachts passing between marinas can use the inshore zones and vessels crossing the scheme, such as ferries, must cross at 90 degrees. Channel Swimming escort pilots are allowed to cross the lanes but have to be certified as competent by the Maritime Coastguard Agency with stringent safety rules for equipment carried on the boat including the AIS – Automatic Identification of Ships radar. This allows the coastguards and other shipping to see vessels on their radar giving information of where they are going, how fast and what size they are.


As we entered the South West Lane, Dover Coastguard informed us that 2 tugs - En Avant 1 and Serval - are towing barges in our general vicinity and on the next traffic broadcast gave our position with the information that we are escorting a swimmer and have limited manoeuvrability. A small tanker 90m long called Arklow Venture passes astern.

1140 A container ship from the VFB Line - CMA CGM Hydra - passes our bow. It is 347m long. Felixtowe is one of the few ports that can service the biggest of the World's shipping and a new terminal has recently been completed that will be able to accommodate Maersk's new Super E class that will be 400m long.
In the next hour a number of ships travel down the South West Lane - Elb Trader; Taixing; Montauk; Loveland Island (248m long) Nst Natasia and interestingly KV Bergen, which is a Norweigan Law Enforcement patrol vessel.
1245 Pace swimmer Keith accompanies Angela for an hour. 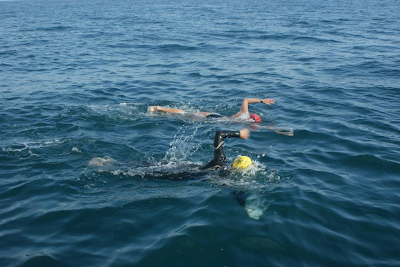 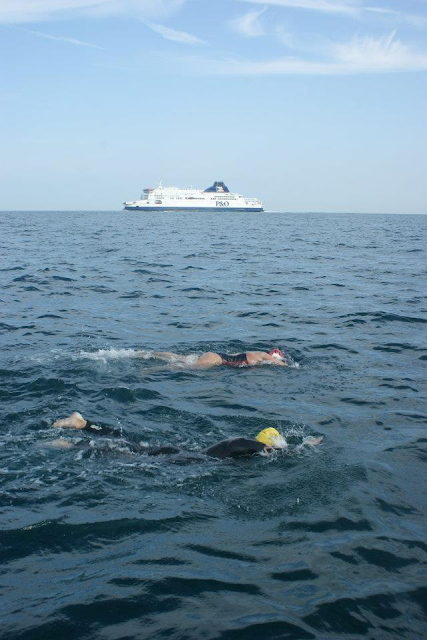 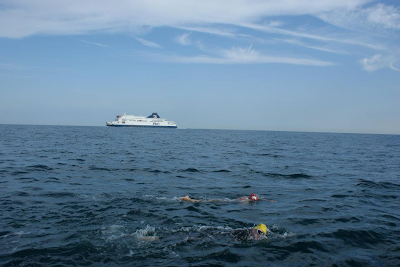 1426 We enter the separation zone.
1445 Pace swimmer James accompanies Angela for one hour.
1445 We enter the North East lane. A tanker, MT Deep Blue passes across our bow. It is 250m long.
1525 I see on AIS a ship named Florence on a close course to us. Gris Nez Traffic informs the ship we have swimmer in water and the ship kindly alters it's course.
In the next hour a number of ships pass us in the North East Lane: MSC Regina (259m); Euro Squall, Tegesos; YM Unison (330m).

1645 Pace swimmer Keith accompanies Angela for an hour.
Prescilla, Aries, Moi Matrix (302m) Loya, and Corossal pass us in the next hour.
1845 James accompanies Angela for an hour. Gallivant another Channel swim boat which has been escorting a swimmer in front of us all day is now a quarter of a mile ahead.
Another procession of ships makes it way up the North East Lane: Canarian Reefer; Blue River; Torm Marianne; Kornett and Ran.
2010. We leave the North East Lane and enter French Inshore Waters, passing Gallivant.
2050 Keith goes in again. The tide has turned and the flood is through. We have missed Cap Gris Nez. It is sometimes hard to describe the effects of the current and tide that run past this closest point to England. This photo taken by a satellite (see http://en.wikipedia.org/wiki/Cap_Gris_Nez ) shows the current that moves in this relatively shallow part of the Channel. Remember here the Channel is 21 miles wide and that 220miles width of sea from the Atlantic is pushing up into it. 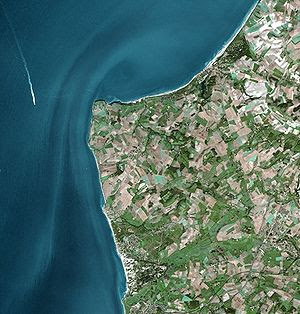 
2140 In the lane behind us a Container ship from the VFB Line makes its way up the North East Lane - CMA CGM Pegasus - it is 363m long.


Our course is now for Cap Blanc. This is a difficult time for any swimmer as a days work of swimming has already been done and France is tantalisingly close with it's lights beckoning. The current is carrying us parrallel to the coast which is dropping away giving the swimmer more distance to cover. Lots of swimmers make it this far and have to give up, beaten by the tide, current and exhaustion. Angela keeps going. We come just inside the Abbeville buoy and we finally land at 0015 at Cap Blanc, just below the war memorial.
17hours and 1 minute to swim the English Channel! Well done Angela.
Posted by DanEarthquake at Sunday, October 09, 2011