It was an unexpected call to ask if I would be available to accompany a trip with Stuart Gleeson on Thursday. My preparations for my own adventure were advanced enough to allow a days interruption – Winter Coastal Endurance – living in a tent for 6 months to raise money for Army charities.
Accordingly I was then contacted to determine a start time – meet at Dover Marina for 0130hrs.
Met Stuart Gleeson the pilot – we’ve met before – and his crew Stewart Richardson. Relay team arrived a few minutes later. They loaded their equipment on board and got themselves ready. Stewart Richardson gave a safety talk about lifejackets, radios, what to do in an emergency etc.
The team are a group of Midwives, raising money for a charity.
Sarah Coates, the first swimmer got ready as boat travelled to Sanfire Hoe, the start point. There were three boats with swimmers starting around the same time – Viking Princess and Louis Jane.  Every hour there is information to record – stroke rate of swimmer, temperature, wind force & direction, flow of tide and height of waves. Also the position of the boat – latitude and longtitude – and a record of what the swimmer(s) eat/drink during their crossing.
Sarah entered the water and swam to the small beach at Samfire Hoe, Stewart Richardson shone a light ashore. When she had cleared the water and signalled ready, the swim started officially and Sarah began the swim to at 0245hrs. The team are enthusiastic but obviously a little apprehensive. Jen Hamilton gets ready next and takes over from Sarah at 0345hrs. Sarah is helped on board and dries off. 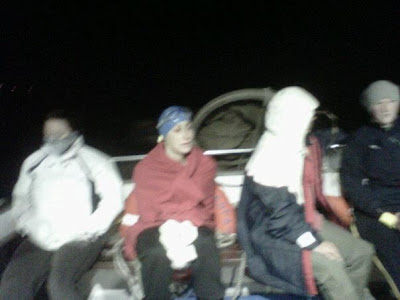 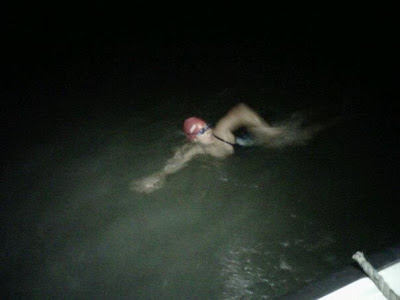 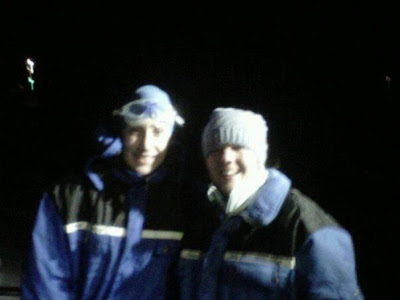 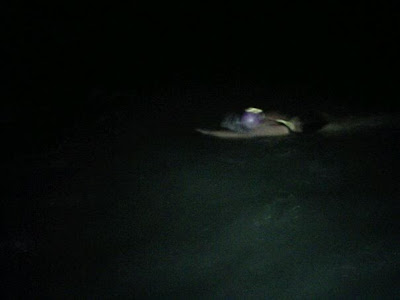 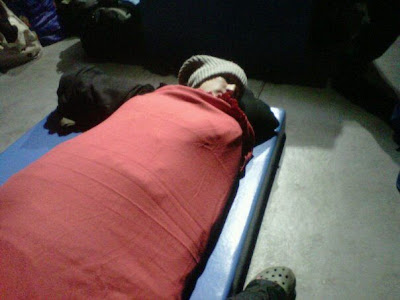 It’s still dark at 0445hrs when Paula Strange enters the water and takes over from Jen. We are 1.5 miles off the shipping lane. During her swim Paula was sick but carried on her swim. At the change over to fourth swimmer Vicky Woodlands - 0545hrs - we enter the South West Shipping lane. 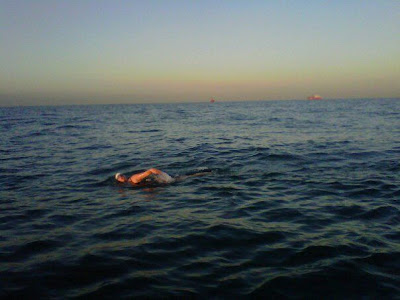 Edjan gas tanker appears to be on a course too close so Stuart gets Vicky to treadwater for four minutes to let it pass.
0645hrs. Stacy Morgan is the fifth swimmer – the changeover is the best so far – the team is getting more organised. We see a number of ships in the South West lane during our passage. It is hard to get the names of most of them, but a check on the ship AIS website shows that Edjan was in a steady stream of traffic that passed us: General Cargo ship Julia; General Cargo ship Emsbroker; Container ship CCNI Atlantico; Cargo Ship M.V. Calibria; Tanker Anna Victoria; Vehicle Carrier London Highway; Container Ship Cap Gabriel; Container Ship Rio Del La Plata.
0745hrs. Kerensa Davies is swimmer number six. We still have 1.1 miles to go to clear this shipping lane to enter the seperation zone. Kerensa was sick, but carried on.
is calm with slight waves. Ripple at height 0.5 metres. 6th and 7th swimmer – Jill O’Dwyer – change over. Just past the North Ridge bouy in the Seperation Zone.
0945hrs. Sarah takes over from Jill. Stuart had to hold Sarah for a minute of treading water due to two French trawlers out of crossing our path.
1045hrs. Jen is in again. Sarah said she felt a lot better this time around and enjoyed it. This is despite being stung by a small jellyfish. 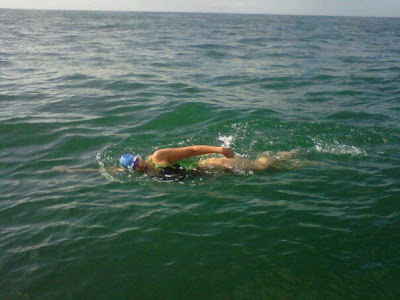 The team has settled down now and are enjoying the swim.
1145hrs. Paula in again. Sick again, but carries on.
1245hrs. Vicky Woodlands in for second swim. Now in the . Lots of ships pass us in the next few hours: Tanker New Breeze; General Cargo ship Hendrik – S; General Cargo Ship Romi; Tanker Maesk Rosyth; General Cargo ship Baccara; Container ship Montreal Express; General Cargo Ship Fehn Coral; Cargo Bulker Cape Veni; Tanker Dutch Mate; Vehicle Carrier Gran Canaria; General Cargo ship Sardinia. We have to alter course to avoid , which is a hundred metres long. Not the biggest of the ships that pass us, but certainly not one we would like to get too close to. Those interested in seeing more detail of these ships can visit the website: http://www.shipais.com/photos/
1345hrs. Stacy Morgan enters the water, taking over from Vicky. Hourly checks show that the water temperature has dropped by a degree and a half. This is likely due to our position over the deepest part of the Channel. Recent research and investigations have discovered that the deepest part of the was once a river bed and that the surrounding area was inhabited, sometime before the last ice age. For swimmers this means that on the change of the tide – in Vicky’s case from Ebb to Flood – the flow of water travelling along this deeper part can be stirred up by the large propellers of the passing ships and high speed ferries resulting in a variation of sea temperature. 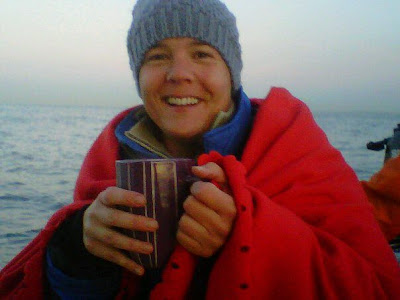 1445hrs. Kerensa takes over from Stacy. There has been a break in the traffic for half an hour now, which is welcome. Our passage through the so far has been quite busy. 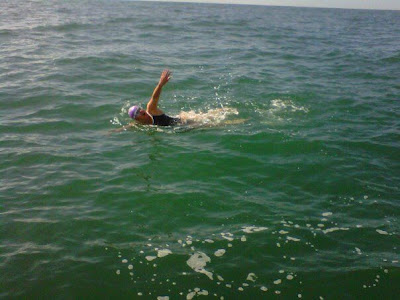 1545hrs. Jill takes over from Kerensa. is closer now of course, the team can see progress and are happy in their efforts. 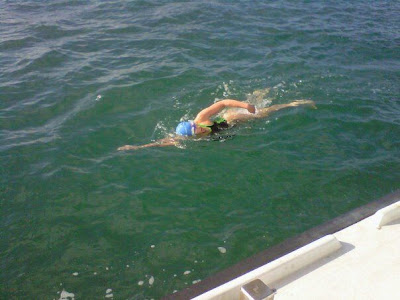 1645hrs. It is Sarah’s turn to swim again, surely her last rotation. Pilot discusses our position and the likelihood that we might get taken around the (Cap Gris Nez) towards depending on the strength of tidal flow and the speed of the swimmer(s) in the last few hours. 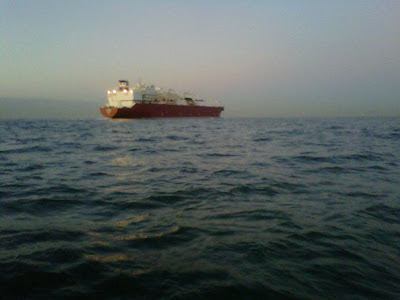 1745hrs. Jens turn in. There is a possibility that we Jen might land the team, but she will have to swim hard. Paula, who has been sick on both her swims may be hoping that Jen does indeed land – but it is hard to tell because in relays it is always good to be the person who finishes for the team. Stuart is making preparations with Stewart for the finish – the small boat is pulled closer and the engine is started. 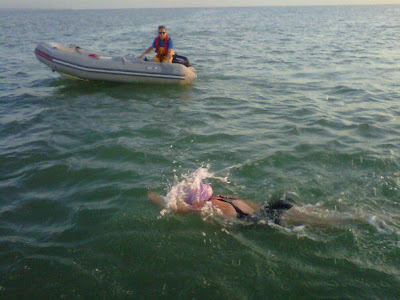 1845hrs. Close, but not close enough. Paula enters the water and takes over. It is a short swim to the rocks, deceptively close but it still takes twenty minutes to cover the distance and clear the rocks. 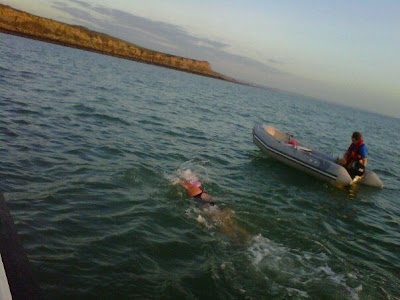 At 1905, seventeen hours and twenty minutes after Sarah Coates started the journey, Paula Strange lands in . 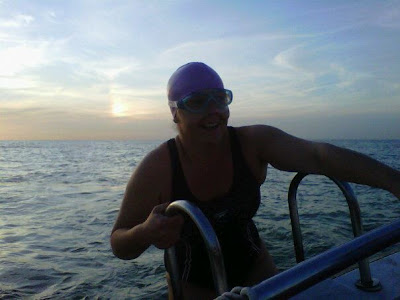 Back on board it is a happy occasion as Paula dries off and changes. There has been a few hard moments for the team, but wind, tide, shipping and the two French trawlers did not manage to thwart the efforts of these remarkable ladies. Well done. 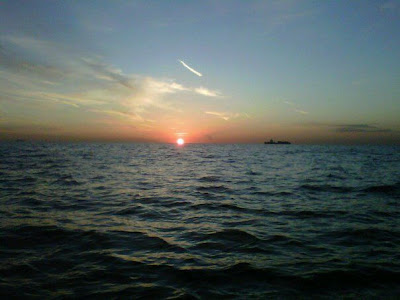 Hi Stuart,
Just wanted to say a massive THANK YOU to you, Stewart and Mike from all of us, we really did have such an amazing day on Thursday! I can’t begin to tell you how elated, delighted, ecstatic, overjoyed and thrilled we all were to successfully complete our Channel Swim!!
Thank you for your amazing support and encouragement, your expertise of The Channel, your knowledge of the tides and weather, for getting us there and back safely (from my dad!), the wonderful cups of tea, the updates of the progress and water temperature!! I’m still checking the shipping forecast and I still don’t understand it!!
Many, many thanks to you all once again, please pass them on to Stewart and Mike. If I hear of anyone wanting to do the amazing crazy swim I’ll be sure to recommend you!!
Thank you,
Paula & The Team of Successful Channel Swimmers
xxxxxxx
Posted by DanEarthquake at Tuesday, September 20, 2011