Report by Keith Oiler.
0925Arrived at Dover Marina. Very quiet this morning - no sign of the relay team or Sea Leopard. Weather good, overcast sky but dry with light winds. High tide is at 1010hrs at a height of 5.8m.
0935 Boarded Sea Leopard with pilot Stuart Gleeson and crew Stewart Richardson. Team Italian Dolphins arrive soon after. Introduced to team and two supporters, Laura and Francesca. Communication may be a problem. Only Daniele and Laura appear to have some understanding of English and Italian isn't Stuart's second language.
0945 Stuart advised Daniele that the weather may not be good but that the forecast is for improved conditions towards the end of the the swim. After discussing with team, Danielle confirmed that they wished to continue with the swim.
0952 Stewart gave full and comprehensive safety briefing - sign language and gesticulation appears to overcome the language barrier and Daniele interprets for other team members.
0955 Left pontoon. KO informed team of proceedures and CSA guidance together with main rules applicable to relay swims. Questions raised and answered.
1005 Left Dover harbour to start swim from Samphire Hoe.
1028 Off Samphire Hoe beach. Walter preparing to swim - warming oil applied to full body. 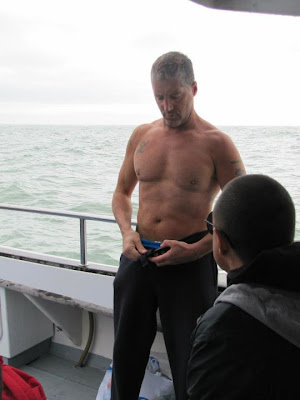 1036 Walter enters water and loses goggles which are retrieved by Stewart. Swims to shore, where he stood clear of water on shingle beach.
1042 Walter reenters water on sound of Klaxon. Stopwatch started and swim commenced at 1042hrs.
1046 Walter swims to Sea Leopards port side. Weather: Stiff breeze, overcast but light skies. Sea is choppy with light to moderate swell.
1050 Inshore waters are quiet. No other vessels in sight other than P&O ferries entering/leaving Dover Harbour. Walter swimming strongly at a stroke rate of 64spm. Making good progress in not ideal conditions.
1110 Stuart contacted Dover Coastguard to record start of swim.
1120 Inshore waters remain quiet.  One yacht off starboard bow, not under sail.
1125 Team remain bouyant but Clemente is a bit quieter and Francesca is sleeping - not enjoying the lively trip.
1138 Clemente preparing to swim. Warming oil applied to full body plus suntan cream. 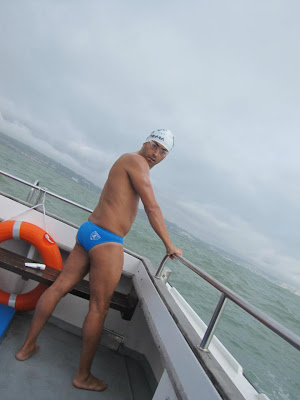 1142 Clemente enters water from port side on time signal, approaches Walter who exits water via ladder on stern. Note: all subsequent change overs are timed and observed to be correctly undertaken.
1143 Standard data taken and recorded at hourly intevals for remainder of swim.
1150 Francesca is the first to pay visit to starboard side of Sea Leopard, looks like my water temperature bucket may be put to alternative use this trip.
1232 Daniele commences warm up and preparation for swim. Warming oil applied to full body. 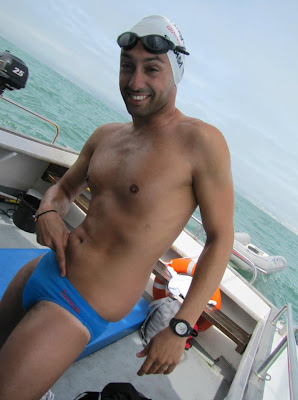 1305 All team remain in high spirits - other than Francesca who is asleep on the engine hatch. 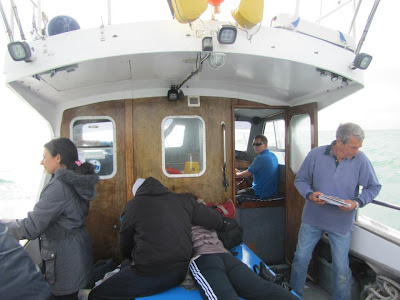 #
1310 Daniele change to breast stroke for short period (6 strokes) before reverting to front crawl Swimming strongly at 72 strokes/min.
1315 Reverted to breast stroke for 6 strokes
1316 Large Bulk carrier Ice Base passes approx half a mile across bow.
1318 Daniele stops swimming momentarily, twice in short period after being hit by rebound waves from Sea Leopard. Conditions are not good for swimming and do not appear to be improving.
1328 Enter South West Shipping Lane.
1329 Daniele stops swimming - no apparent reason. Says she is ok and ontinues swimming strongly.
1330 Alessandro preparing to swim. Warming oil applied to full body. Note: no further notes made of warm up proceedures as similar process followed for about same period prior to each change over.
1332 Daniele stops swimming - to check watch. Continues to swim but stroke rate has dropped slightly to 68spm.
1336 Sea France freight ferry passes close on port side bound for Calais.
1346 Coaster RMS Ratinger passes very close across bow.
1350 Wilson Line Coaster Wilson Rye passes close across bow. 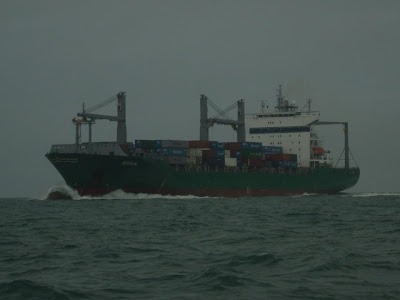 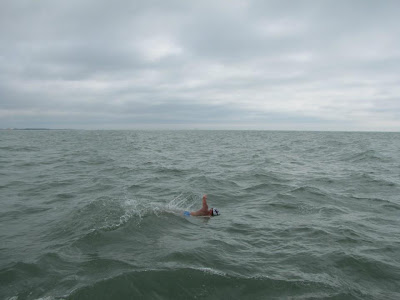 1412 Large APL line container vessel  passes close astern. Visibility has further reduced down to less than a mile now. Conditions for swimming are getting worse - moderate swell with 4/5 feet  breaking waves. Alessandro is continuing to swim strong and consistantly at 66spm but is finding it hard going.
1418 Daniele is taking a long time to recover from his swim. Still feeling cold. Wrapped in sleeping bag and additional clothes.
1425 Daniele pays visit to starboard side. Still struggling to recover his body temperature. Has taken nothing to eat or drink.
1500 Conditions remain uncomfortable for all on board Sea Leopard. Much rocking and rolling. Visibility slightly improved at approx 2 miles. No other vessels in sight.
1507 Alessandro visiting starboard side. Daniele is much brighter and has warmed up. Asking Pilot if he is happy with the crossing. Stuart confirmed all ok. Swimming well.
1540 Left South West lane and entered Separation Zone.
1550 Large Bulk carrier passing approx 1 mile astern.
1615 Leaving Separation Zone and entering North West shipping Lane. French Coastguard advised.
1624 Daniele requested confirmation of rules re: order of swim. Confirmed that as each swimmer had swam a leg, no changes can be made to the order the swimmers enter the water. Daniele confirmed that he understood.
1628 Clemente stopped swimming momentarily to adjust strap on goggles. Continued to swim strongly stroke rate 78.
1644 Stuart treating Clemente for jellyfish sting to chest. (Antihistamine cream applied.) Clemente stung just before change over.
1656 Large container ship Zim Moskova passes very close across bow.
1657 Daniele stops swimming and changes to breast stroke for six strokes, then reverts to front crawl. Continues to swim strongly and consistantly at 72spm. 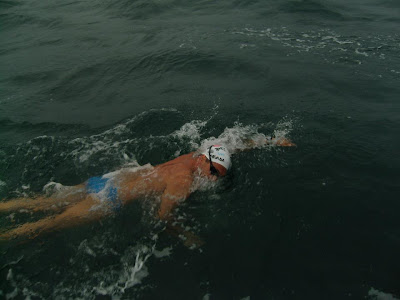 1720 Wind has increased slightly. Sea conditions have worsened again - but, to be positive, at least it is not raining. Visibility has decreased.
1721 Daniele stops swimming momentarily, swum breaststroke for six strokes then reverted to front crawl again.
1730 Daniele stopped swimming after being hit by a large wave. Took a couple of breaths, then continued.
1738 Shipping remains quiet. Visibilty has reduced slightly - now down to about quarter of a mile. No visible shipping.
1810 Alessandro stops swimming - has entered an area of weed. Continues to swim strongly at 68spm. Laura encouraging Alessandro and warning of weed - "Alga, Alga." Stuart is improving his knowledge of the Italian language.
1828 Large tanker Horizon Armonia passes across bow.
1835 Alessandro stops swimming - took mouthful of water? Continues to swim strongly in difficult conditions. Visibility remains poor but shipping quiet.
1838 Large tanker passes astern.
1850 Team remain in high spirits, other than Francesca who has beein asleep on the engine hatch for past 2 hours.
1921 Alessandro paying visit to starboard side. As anticipated, water temperature bucket has been put to alternative use.
1927 Coaster Sea Kestrel passes close astern.
1932 Clemente preparing to swim. Light sticks activated and attached to trunks and straps on goggles. All swimmers use light sticks form this change over.
2005 Left  North East shipping lane and entered French inshore waters. Visibility remains very limited towards Dover but has cleared towards the French coast and lights on coast are now clearly visible. Weather has improved - wind has dropped, sky is clearing and the moon is up. Sea conditions are improving with only a slight swell.
2010 Clemente swimming too close. Asked to swim a couple of metres further away from port side.
2020 Two small coasters passing approx three quarters of a mile astern. Viking Princess approx 1 mile
to south west. Light of Louise Jane can be seen further west. A third swim boat Pathfinder is approx 1 mile north of us.
2050 Stuart confirmed approx 3 miles off French coast.
2113 Daniele stopped swimming and changed to breast stroke for six strokes. Returned to front crawl - swimming strongly at 72spm
2147 Viking Princess passing on starboard side on return to Dover following successful completion of swim.
2204 Alessandro stopped swimming twice in as many minutes. Seems to be looking to see how far to go. Lights on the coast look very close but the tide is taking us up the coast. Sea is now flat calm with a very slight swell. Without the tide, near ideal swim conditions.
2230 Stewart preparing tender for landing. all of the team are now getting excited about the prospect of being the first all Italian relay team to complete the Channel swim.
2242 Change over. Walter enters the water and takes over from Alessandro for what should be the final leg of the swim. Note: Before entering the water Walter reminded of correct proceedure for completion of swim.
2258 Approx half a mile from shore off Cap Blanc. Stewart preparing to board tender with Laura who will be accompanying him ashore.
2305 Tender away to accompany Walter to shore. Sea Leopard standing approx 200m off shore. Stuart holds position to enable finish of swim to be observed.
2321 Stewart confirms via radio that Walter has landed on beach between rocks and has completed swim by standing clear of water. Stopwatch stopped at 2321hrs. Location: beach below Cap Blanc. Total time 12hr 39min.
2330 Tender returned to Sea Leopard. Laura, Walter and Stewart safely back on board. 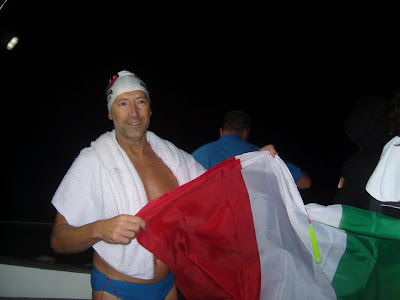 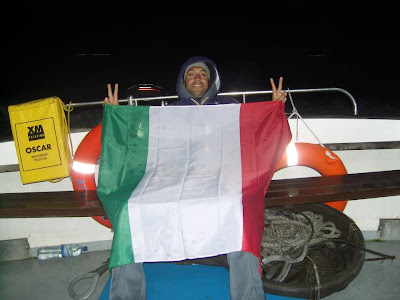 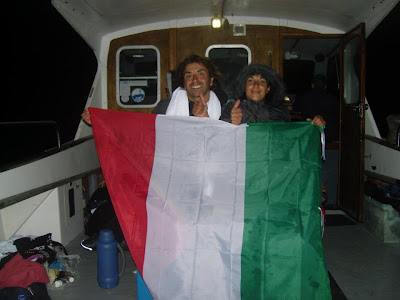 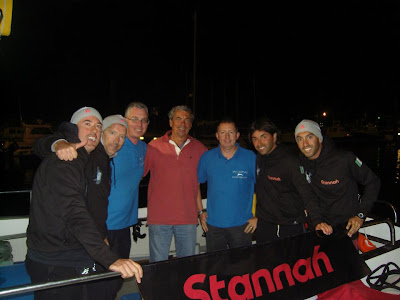 0210 Completed paperwork and left Sea Leopard after wishing the Italian Dolphins success in future challenges and a safe return journey home.
Observers Note:
A relatively uneventful swim in far from ideal swim conditions. Visibility was considerably restricted for most of the crossing, but shipping was relatively quiet for the whole of the swim. The silly season is nearing an end so very few small leisure craft on either side of the Channel - or had they all listened to the weather forecast? Well done Italian Dolphins, an excellent swim in difficult conditions.
Posted by DanEarthquake at Tuesday, September 20, 2011