0000 - Nicky Graham, Elliot Mather & Diana Dawson boarded the Sea Leopard boarded the boat for Nicky’s Solo Channel swim attempt. Nicky & Diana have swam with me before in separate relay swims. The had appointed Dan Earthquake to be the official observer for the trip. I introduced everyone to my crewman Gary Clark & the usual observer & safety briefings followed.
0037 – Left public pontoon. 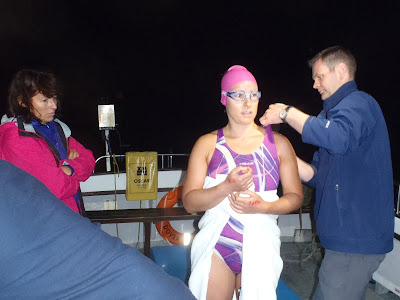 Nicky Graham getting ready.
0116 - Nicky swims to beach at Samphire Hoe.
0117 - Nicky swimming on the Port side of the boat. She is comfortable on either side having been on training swims in the past.
0120 - Dan notes her stroke to be 72 per minute.
The sea is calm with a slight breeze. A few of out today: , Sea Satin, Gallivant, Masterpiece, Anastasia & Pathfinder.
0137 – I notify Dover Coastguard that our Channel Swim has started.
0208 - First feed. Elliot, Nicky’s partner is well organised & calmly gives encouragement.
0306 - 3.9 miles covered, 2.5 miles from the South West lane.
0311 – Feed. Nicky drinks ¾ of the pint of Maxim & blackcurrant, pouring the remainder over her face before continuing onwards. Dan times the feed to be 40 seconds.
0348 - 1.2 miles from the SW lane. Small freighter Jrs Merkur passes in the lane ahead. On board we have an AIS (Automatic Identification of Ships) system. A beacon broadcasts information about us – who we are, where we are, how fast we are going, how big the boat is etc. We can also see ships on a virtual map which tells us the same information.
0400 – Visibility is getting worse, some mist forming.
0432 – A coaster crosses ahead at approximately half a mile. hidden by mist.
0435 – A boat in the SW lane a few miles away looks a though it’s course will intercept ours. As well as the AIS we have an electronic system that calculates if our course is likely to put us in collision with another vessel. Experience means that this is a useful addition to our observations. I make adjustments to our course which means that swimmer continues onwards without interruption. Sometimes in the middle of a lane multiple ships on similar courses may require us to stop. Some of the largest ships are running on automated systems which plot a course & speed that have to be overridden manually by their Captains if deemed necessary. The speed & size of these vessels & the varying depths of the Channel mean that their ability to alter course is restricted. For the sake of a few minutes, we may stop. These minutes can provide the swimmer with some extra nutrition & encouragement.
0443 – Feed. 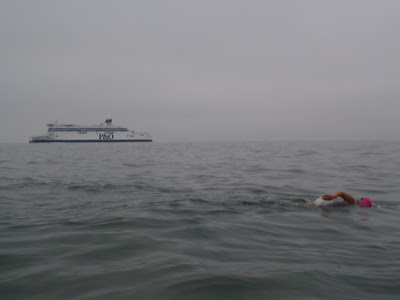 Ferry Pride of bound for passes behind Nicky Graham
0511 – Feed. Dan has noticed she is shivering. Her stroke has settled to 64 per minute.
0541 - Nicky complains of cramp in her legs & takes a feed of Maxim.
0546 - Pride of passes 600m to Port side (approx 600m) for me to read its name. Heavy lifting vessel Jumbo Jubilee passes ahead at just over half a mile causing a few waves.
0608 -  Feed. Nicky tells Elliot she wants to stop. I’m surprised as we are making good progress & keeping pace with other boats on similar courses.
0622 – Feed.
0625 – container ship passes 400m astern.
0628 - Stadum passes 500m astern.
0631 – Nicky says she wants to stop swimming. Diana & Elliot kindly encourage her to continue. 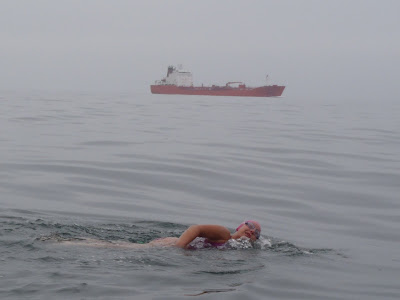 0639 – Nicky swimming on a calm sea as Chemical tanker Kristen Knutsen passing ahead.
0654 - Feed & painkillers. Some are dropped, so this feed takes too long. Elliot & Diana again have to persuade Nicky to continue.
0700 – Jellyfish sighted in small groups. There have been a lot this year.
0709 - 1.5miles from the Separation zone. More jellies now, Nicky trying to avoid the big ones.
0717 - 60 strokes per minute. Thick carpet of weed ahead.
0722 – Feed. Tanker Adebomi passes 400m ahead. Nicky still swimming strongly.
0753 – Good quick feed.
0812 - Nicky complains of cramp.
0826 - Nicky tells Diana & Elliot she wants to stop. I confirm that the course we are on is a good one & remind Nicky that every time we stop we drift which will make the swim harder later on.
0833 - Nicky stops again. Dan says Diana would like to swim with Nicky for an hour & asks if I am happy it is safe to do so. I agree, so long as Diana swims on the far side of Nicky to help keep her close to the boat.
0839 - Hardanger passes our stern about half a mile. Diana puts her wetsuit on. At
0842 - Nicky stops again & wants to get out. She has a feed.
0844 – Diana enters water. 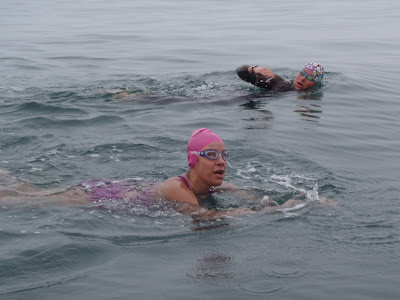 Nicky Graham & Diana Dawson
0849 - Nicky stops for a stretch & wants to stop. Diana convinces her to carry on & they swap sides. Ahead, Hanjin Harmony crosses our path. AIS information shows the ship to be 366m long.
0854 – Dan asks where we are - we are now in French waters.
0856 -  Feed & painkillers.
0911 - Nicky stops for a long time. We’ve drifted South west with the Ebb & it is strengthening.  Eventually she swims on.
0917 - Nicky has a feed of Maxim & suddenly stops & shouts at everyone for about three minutes. As she sets off again Elliot comes to look at the electronic chart & we discuss where we are & what Nicky will have to do to succeed.
0925 - We enter the Separation Zone. Nicky stops again. She has come round towards the rear of the boat. Diana tells Nicky to think hard before she quits. Nicky hesitates. Despite her protests Nicky is still swimming strongly. I convince her to carry on.
Sometimes in the latter stages of a swim when swimmers are veering off away from the boat & becoming less coherent it is necessary to abort the swim for their own safety & the swimmer will disagree & it makes for conflict. No one wants to be told they have to give up on an ambition & some take it badly. Other times a swimmer needs more than encouragement from their team & the information a pilot can give in regard to position & likelihood of success is motivation enough. Nicky is still swimming well, but doesn’t believe it herself today.
0944 – Dan signals for Diana to get back on the boat.
0957 – A quick feed. Uganda  passes half a mile astern at 1004.
1011 – I inform Gris Nez Traffic that we are entering the North East lane.
1020 – Agonistis passes 1 mile ahead.
1026 – Feed.
1057 - Feed.
1126 – Feed. Nicky seems a little happier. Sun is starting to burn off the mist.
1156 - feed.
1211 - Nicky begins to vomit & calls for mouthwash. Elliot also gives some hotwater. Nicky drinks it & continues.
1221 - Nicky wants to know how far to go. The supporters plan extra feeding for the next hour hoping that it will fuel Nicky for a push when the tide turns. Nicky carries on.
1248 - Nicky asks to climb the ladder. Diana & Elliot persuade her to continue, this time with the plan to push hard for an hour & reassess then. A car transporter crosses our bow half a mile ahead.
1259 - Nicky stops for the final time & insists that she has travelled as far as she can go. The ladder is lowered. Nicky is helped aboard.
Final position is recorded to be Latitude 50’52”.18, Longtitude 001’125.30. We are approximately 6 miles from the nearest point of land.
Swim time 11 hours & 42 minutes.
Nicky, it was hard to see you struggle with self doubt when you were doing so well. It is always a pleasure having your company & hope to see you again soon.
Posted by DanEarthquake at Friday, July 19, 2013