For some reason this stayed as a draft in the webpage archive, but now that the season is coming to an end swimmers who are thinking about their preparations for next year would do well to consider hiring Sea Leopard for some out of season training. The Coldwater Culture training weekends that I run visit Folkestone every month of the year as a rule, & we get out to sea with Stu & Sea Leopard as much as the weather allows. It is tough, no doubt about it, but if you are going to swim the Channel next year some experience with a boat & pilot is invaluable. There is plenty to do: beach practice starts, swims against & across the tide, follow the boat drills - it's amazing how many people leave it to the day of their swim before realising that they will have to jump overboard (likely at night) & swim to the starting beach. Then when they get back parallel to the boat they find that they feel uncomfortable with it being close & consequently waste valuable time by confering with supporters & pilot about the best position to swim in. Of course, I recommend it: I've been hiring Stuart for training trips since 2007 & have had some of my best swims with him. I have found it to be very useful & most of all fun. No point pushing yourself to the limits if there isn't some element of enjoyment in it. Anyway, back to the story.

We met at Dover Marina, not a tickle of breeze: a bit overcast. Introductions to those who hadn't previously met: 8 of us swimming today off the coast with Stu Gleeson & the Sea Leopard.

New to sea swimming, Jim Malone entered the water first, 7 degrees the reported sea temperature, though the Folkestone weather buoy recorded the water to be 6.2oC. Jim got into a comfortable stroke early on making a credible 25 minutes, the swimming in more severe temperatures inland showing its worth.


Next in was Nicky Graham, very fast stroke - hard to get a good photo of her. 20 minutes no wetsuit made for another good effort.


A seal watched us from a reasonable distance, I've had to blow the photo up - I guess he/she was curious. Living on the beach near Samphire Ho, the local seals see plenty of Channel Swimmers - but not in February.
Sue Brookes jumped overboard as much to dare sister Ali as anything else, swimming strongly for 25minutes - again impressive for a first session in the Channel in February. 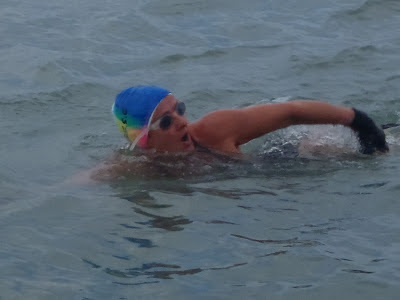 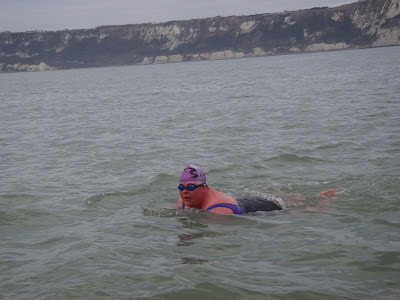 Ali Hornby couldn't be cajoled into jumping in despite the taunts from Sue & I. Goggles were her enemy today - spares as it turned out due to lending usual ones that had not been returned. We all agreed that lending best goggles is beyond reasonable generosity.

Hanno Nickau - half man, half cyborg - unplugged himself from his computerised life suppport & dived overboard. Tide in full flood meant we had to change direction, we opted not to tell him so as to test whether he would follow the boat. He did & completed a full hour.
I jumped overboard armed with camera to get some swimmers eye photos of Sea Leopard. Then I got back on board so we could cruise back towards Shakespeare as the drift was taking us closer to Dover harbour than was desirable. I got back in for a short swim - lazy today. Without a hat the neuralgia was severe & it took me 62 breathes to feel comfortable, swimming with the tide almost to Admiralty Pier.

By this time we were all hungry, adjourning to the pub was not productive as Rugby was on & kitchen closed to cope with the multitudes glued to the TV. Sarah Dodsworth and some of the Blue Tits were there, having swam on Sunny Sands in the morning, I stopped short of accusing them for eating everything, saving that for Victoria who had got there just before us and had the last order of the day. Ugh! Ball games, they should be kept on school playgrounds where they belong. For me real sport is swimming, running, climbing, athletics, gymnastics, powerlifting. The only team sport I ever liked was Tug of War. Ball games. And no dinner. We reconvened at the Chinese buffet & made plans for a night dip on the beach. I gave my friends a short safety briefing, always best to have some sort of plan especially for swimming at night.

Lots of people avoid, fear or simply never get round to swimming at night. I've swam a few times in various lakes at night and it is enjoyable, sometime magical if the sky is clear and the stars visible. Channel solo and relay swimmers may have to swim in the dark for some part of their trip; there are a lot of early morning starts and if the first experience of swimming at night is the swim to Shakespeare or Samphire Ho beach at 1am on the day of your attempt then you have only yourself to blame if it bothers you. Stu and I can help: A practice start; some swimming offshore away from the protection of the cliffs at different times of day; varied conditions; swimming across and against the tide - these are advisible before committing to a date and the expense of the whole adventure. It is always a shame to hear of those who set off unprepared and don't make it - I was one of them a few years ago, suffering dreadful seasickness. It's what started me hiring Stuarts boat - to try and overcome it and I enjoyed it so much I kept coming back.

﻿Thanks to Victoria Hill for additional photos.
Posted by DanEarthquake at Sunday, September 23, 2012