Our preparations have been sound: distance training; winter exposure; swims off the coast with the boat; practice beach starts; swims in rough water & wind; night swims. We knew what kit to take & took it. Our pilot, Stuart Gleeson & his crew Stu Adams are friends & we are used to swimming with the boat Sea Leopard. Of course, such preparations are no guarantee for success. In our game of if's, the nature of the challenge is one of fast changing variables. We can only ever hope for the best of circumstances & some luck to help us on our way.
Our opportunity came early this time, first day of our tide. I book first slot of the season because I don't want to be in any queue. Longest day means more daylight to swim in & for me the summer is full if commitments to safety teams so my own training season runs late September to early May. This past winter yielded some fantastic training partners, some of whom joined me as latest incarnation of the Winter Swimming Council. We all trained through the winter & are comfortable in each others company. 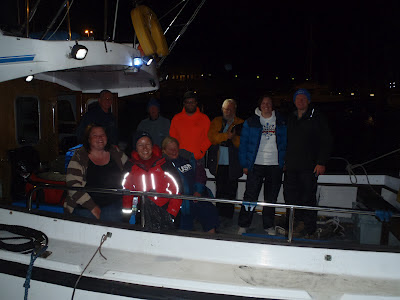 We met at Dover Marina at 1230am, loaded our baggage onto Sea Leopard & after the usual safety briefing made our way towards Samphire Ho to start. Wind was a consideration early on, but had been forecast to drop away as the day progressed. 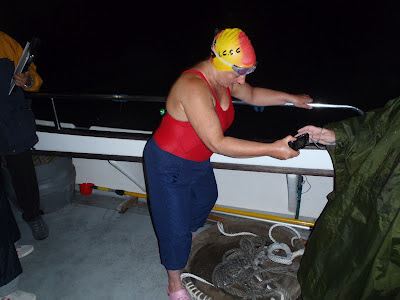 Ali Hornby started the event by making the lonely swim into the dark beach below the cliffs, finding it tough to get into any sort of pattern in the early stages. Ali is booked for a solo later in the year, so accompanying the relay is important practice & research. Hanno Nickau replaced Ali after an hour filling the second slot. A seasoned ultra triathlete, Hanno is attempting the Enduroman Arc to Arc (see www.enduroman.com) in August so like Ali, is along for the experience. 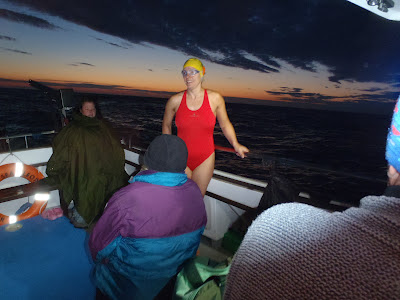 Nicky Graham was in at number three, fastest of the group with a solo booked for 2013. I (Dan Earthquake) am here for the third trip having been successful & unsuccessful previously. I also have the benefit of having been an observer & supporter on a number of Channel Swims, and was sick for some of them. I'm in the number four position. Number five - Victoria Hill - is relatively new to Channel swimming, very capable & enthusiastic. Six - Anji Page - is the star performer of SLCSC having joined last August with an ambition to do a wetsuited mile. By October Anji swam 7.5miles in 6hours & was offered a place in the team soon after. At seven, John Barry - also booked for a solo this year along for the ride to see the other side before his own attempt. 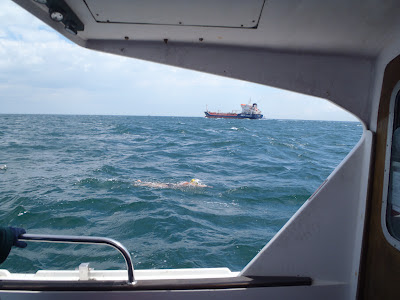 The wind did recede as forecast initially making for good progress, but started to increase again on the second rotation eventually producing swells that were too hard to make progress across. Consequently, we went past Cap Gris Nez, & when the tide turned had no way back. Our options to continue would take us past a third rotation assuming we could make progress against the tide. We could not. I had earlier cast my gift to Neptune with the hope that Fortune Favours the Foolish - & it did. We arrived back safely if somewhat worse for wear, some battling sea sickness, me included, but happy.
I'm not despondent. Each person in the team put in their best effort & gained something from the adventure. For me, it was another day in the Channel with good company. There will be others, I know it is impossible to guarantee success in crossing but with an ambition to simply pursue a lifestyle of outdoor swimming the success/failure balance is less important. Thanks as always to the two Stuarts for their hospitality & careful attention & to Steve Franks the CSA observer who has also become a kind familiar face these past few years. Better/more photos to follow.
Posted by DanEarthquake at Monday, July 02, 2012