Scraping frost off car windscreens did not deter Hanno, Ali, John & I who met at Dover Marina ready for a swim off the coast. We marvelled at the unlikely looking boat with a windowless cabin and speculated that the owner relied on extra sensory perception to pilot it. A few years ago when I was host of a radio show I twice interviewed Uri Geller. Perhaps this is his boat. I mentioned it to Bob Barlow later and he suggested that the boat would be called "The Bent Spoon." 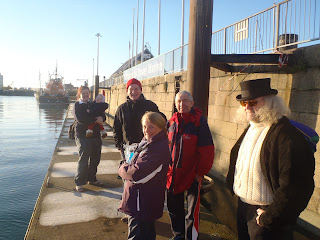 We had to wait for Stuart to scrape the ice off the windows of Sea Leopard, and stood on the public pontoon we were asked by someone from the harbour masters office if we were waiting for a boat. Pete Hornby later asked me if it would be possible to catch a bus from that exact spot, but to be fair to the chap he probably did not expect that we would be going for a swim. 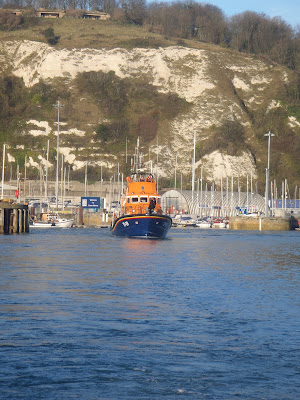 Dover Lifeboat followed us out, but went a different way when we left the calm of the harbour walls. This was the first trip for Ali Hornby and Hanno Nickau so I showed them Shakespeare Beach and Samphire Ho and explained the general reasoning for starting at each place. On the day (or night) of their attempt they would have to get ready in the fifteen minutes it takes to get to the start point before jumping over the side and swimming to the beach. On reaching the shore it is the habit to remain facing away from the boat. Compose yourself, adjust goggles and when ready turn to face the sea with a hand raised. The boat horn sounds, the clock/timer starts and the swim to France begins Both Ali and Hanno will be swimming this summer in solo attempts, with Hanno running from London first and then cycling onwards to Paris in the Enduroman Arch to Arc event.
We took turns to jump off Sea Leopard into the English Channel this morning cheered on by Pete, Tamsin & Lex (who enjoyed her first voyage on a swimming boat. Checking out for a relay in 2023 maybe? I recommend our pilot Stuart Gleeson -as well as his skill and professionalism, Lex enjoys blowing raspberries at him. Channel Swimming is a complex and technical challenge and having a friendly pilot who dines and socialises with us is very valuable. 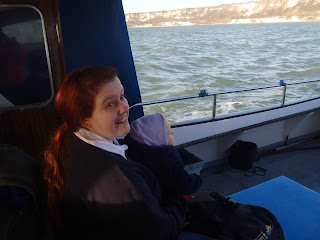 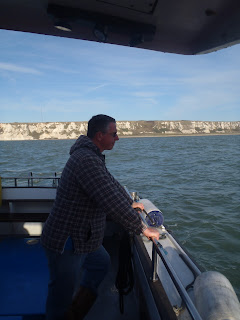 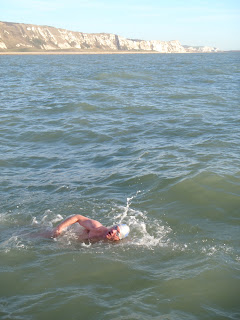 Stuart took us past Samphire Ho so that we could swim across the tide which was flooding into the North Sea. Hanno was volunteered to be first in, he swam strongly. Stuart noted that it was the first time he had not heard Hanno's voice. We did 25 minutes each, John got ready when Hanno had 10 minutes left. At this point I realised that I had left my swimming goggles in the hotel. Ali kindly offered me her spare pair, but they were too tight in my eye sockets, Hannos were the same model. Luckily for me John had a spare pair of aquasphere. John wore a mask for his swim, but had got the edge of his rubber hat underneath the seal, consequently he had to stop many times to empty and adjust it. 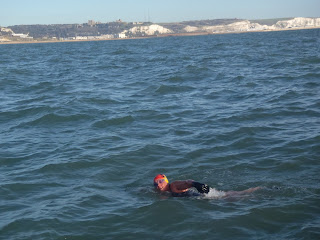 The glorious sunshine & good company kept our spirits high, we have been very lucky to have a gradual step down in temperatures this year which has allowed us to acclimitise effectively. There have been some years that the inland water temperature has dropped from the mid 50's fahrenheit down to low 40's - this makes it hard to keep swimming distances. Ali went next, swimming smoothly through the waves. "I'm only taking fast swimmers next year," joked Stuart, "but I won't mind if Ali takes a while as Pete will keep me entertained, I'm sure." 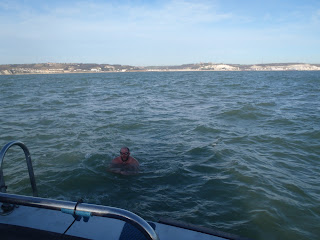 Finally, it was my turn. It took me fifty breaths (a minute) to feel comfy in the face and head and from then on I felt good. Stuart turned me into the tide so I had to work hard, but as usual the time passed very quickly and they were soon waving to me to come in. 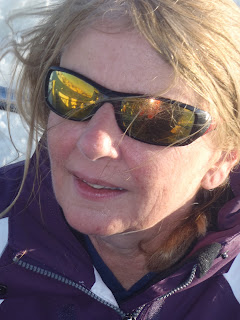 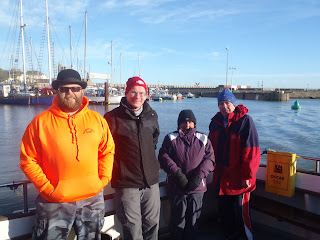 We adjourned to the lifeboat for lunch, where we were joined by Glenn Hatrick. Then it was off to the Sunny Sands for an afternoon swim before sunset. 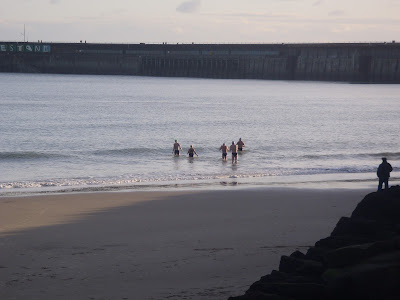 Posted by DanEarthquake at Sunday, December 18, 2011